As reported in Publisher’s Weekly, Amazon is will release ten titles from its Kindle Scout program. What is Kindle Scout? It’s a crowdsourced publishing platform. In the words of Kindle itself: 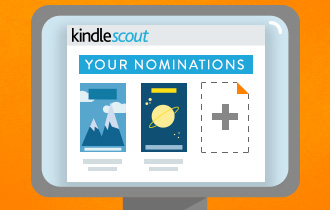 Hmmm … sounds rather familiar* … I wonder why?

The phrase you authors need to see there is “featured Amazon marketing.” Yes-yes, I know that many of my Important Writing Advice Author buddies will tell you that Amazon is as evil as a shade-casting stink-eye from Satan, but for those of you who are looking to actually get on the scoreboard and get paid, that phrase should make you drool. Amazon rules the book world. End of story. Do you have to publish with them to start making sales? Not at all. But if Amazon is going to put their demographic machine to work to put your book right in the face of millions of readers, that is something you can not beat.

If I was in the same place I was back in 2001 (i.e., unpublished, frustrated with the system, waiting for the world to finally read my stories), I would be all over Kindle Scout. In fact, I’d be trying to gamify the shit out of it (in addition to writing the best book I possibly could, mind you). Amazon can make your brand name overnight. Read those contract terms carefully, of course, but almost any way you can start building a following and building a brand is a good thing. (Don’t kill anyone for publicity’s sake, though. That’s bad.)

I know I would do the same thing, because I flipped out over a little company called iPublish way back in 2000. The Internet was this newfangled thing. People were trying to figure out how to use it. AOL/Time Warner came up with a company called “iPublish,” which crowdsourced readers to evaluate which books resonated with the marketplace and which didn’t. Like Amazon does today, iPublish could give a shit what a couple of editors thought about a book’s potential — they wanted to know what book buyers liked. You know, the difference between Europe Central, the 2005 National Book Award-winner by William T. Vollmann, and Twilight by Stephanie Myers, published the same year. Critics and editors will choose Vollmann every time. The reading public made a rather different choice, as reflected by sales figures.

The centerpiece of iPublish.com is iWrite, a community area that offers writers a direct way to get their work in front of other writers and iPublish.com editors. Writers must review at least three short excerpts from works by other authors before they can post an excerpt of their work for consideration. If an excerpt receives high ratings, an iPublish.com editor will read the full manuscript and decide if the work should be published as an e-book and, if it meets certain requirements, as a print-on-demand book.

Yep, a Kindle Scout and iPublish are similar ideas.

iPublish launched their first titles in 200o. How old is that in Internet Years? Goddamn old, that’s how old it is. The URL turns up nothing. There isn’t even a Wikipedia entry for it.  There is even a Wikipedia entry on Toilet Paper Orientation, for crying out loud, and something as ground breaking as the world’s first crowdsourced slush pile goes without? I’d get right on that, if I didn’t have all these dang blog posts and novels to write …

So if you’re a frustrated writer looking for a way to kick in the door, check out Kindle Scout. Yes, you could just publish your own eBook. Yes, you could pursue the traditional route of pinging editors and publishers, looking for an agent, etc. All of these options are there for you. However, if you’ve been a good little writer and you have a few finished novels, getting one or two of them to ride the “featured Amazon marketing” train is like opening up that Wonka Bar and finding the Golden Ticket.