The grand experiment: a screenplay
as an outline for a novel

To outline, or not to outline, that is the question that old Will Shakespear must have asked himself, just as ever other writer in the world has done since Billy moved on up to that deluxe apartment in the sky. We tackled this question in detail in Episode Three of our “So You Wanna Be A Writer” series on YouTube. If you are an outliner, you know there’s more than one way to do it.

Enter the subject of today’s blog: using a screenplay to create an outline for a novel.

You may be thinking: “Hold onto your bonnet of bees, sir — don’t you have that process backwards?”

Most novelists write a novel (hence the name “novelists”), then they — or someone assigned by Hollywood — writes a screenplay based on the book. Adapting a novel for the screen is no easy task. This skill is held in high regard, so much so that recognition of it is a part of the Academy Award for Best Adapted Screenplay. Get really good at this process, and you might take home a slightly phallic statue of a little gold man.

So that’s a novel becoming a movie.

What about a movie becoming a novel? 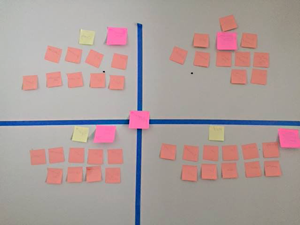 This is how many outlines begin … in MADNESS!

This happens all the time. There’s even a name for it — “novelization.” Take any big scifi movie, for example, and there is almost assuredly a book version of the flick, penned by either an established author or an up-and-comer. Nancy Holder’s novelization of the recent WONDER WOMAN movie* is a good example of this process.

“Wonder Woman was challenging because while I couldn’t add anything ‘new’ that would add to the DC Universe, it was still necessary to add interstitial text,” Holder said. “But of course I was absolutely thrilled to work on it. I cried for joy when I saw the rough cut at Warner Brothers.”

I outline extensively for my work. My outline for ALONE, my most recent novel from Del Rey, was forty pages long — single spaced. That’s practically a novella unto itself, really. I spent two weeks on that outline. When it came time to write the actual novel, the detailed outline made the first draft go smoother than any I’ve written before.

For my current novel-in-process, I’m attempting to write an original screenplay as my “outline.” Why?

REASON ONE: TIGHTER STORYTELLING
Screenplays have some fairly consistent rules. One such rule is “one page = one minute of screen time.” So a 90-page screenplay should be about a 90-minute movie. Much like a taught thriller novel, there isn’t a lot of room for fluff, or for plot threads that go nowhere (theoretically, anyway — THE LAST JEDI notwithstanding).

In a novel, you have the luxury to stray off in different directions or wax poetic about a particular character or setting. In short, there’s almost no limit to what you can do. Go crazy, man, it’s your world. With screenplays, however, there is usually very little trimable fat, because that fat gets trimmed even before the screenplay is passed on to the next level.

My thought is that a screenplays stricter rule structure will force me to think my scenes all the way through, and either tighten them up or  eliminate them altogether if they don’t contribute enough to the story.

REASON TWO: SHORTER PROJECT TIME
I am in the business of selling books. Writing a book is only part of that process. You have to finish a book in order for it to eventually go on sale and bring in money. If it takes me two years to write a book, it had better bring in one helluva payday.

We want to sell no book before its time, of course, but this is also a business like any other — if you don’t put out a product, if you don’t make sales, you will soon find yourself out of said business. Once you go full-time as a writer — unless you have a massive hit novel — you can’t afford to take a decade to write your next tome (get on with your bad self, J.D. Sallinger). Want writing to be your main gig? Then it’s publish or perish. The longer you take to write a book, longer you have to stretch the money earned from the book(s) before it.

A tighter outline means less time writing the novel. A shorter novel also means it takes less time to finish. So if your story is both tight and short(er) than it would be without an outline, you’re heading in the right direction. I think using the screenplay as an outline will force me into a tighter story, which means less wasted writing time. Pages you write and don’t publish are an opportunity cost — the fewer of those you have, the more “profitable” your creative time will be.

REASON THREE: I WANT TO GET INTO THE TV BUSINESS
My long-term goal is to have original TV shows, or TV shows based on my work. If I write the screenplay to begin with, I’m killing two birds with one stone —outlining a novel while simultaneously developing my screenwriting chops. If the screenplay/novel-outline works for me, of course.

And then you have the obvious asset — a finished screenplay for your novel. You might have to come back and edit the screenplay once you get done with the novel (since all novels change to some degree after the outline is finished), but the bulk of the work will already be done. If your novel sells, and if a production company is interested, instead of saying “hey, yeah, I got this novel, what are you guys going to do with it?” you can say “as a matter of fact, I already have a finished scree.” Will the production company or studio use that screenplay? No way of knowing. Will they look at it? Consider it? Almost always, the answer is yes.

In the entertainment biz, if you have a good agent, a company considering your screenplay means they pay for that privilege. They would have to hire someone to write the first screenplay anyway. I think that if I do this screenplay/outlining process enough times, at some point I’ll get paid for that outline. Will that script become a movie? Probably not, as Hollywood streets are paved with unproduced screenplays (what, you thought that asphalt was made of gold? Chile, please).

*Holder has also done novelizations for CRIMSON PEAK and the latest GHOSTBUSTERS.

This post brought to you by the “GoDaddy Coupon” page, which features the code CJCSIGLERC that snags you a brand-new dot-com domain for just 99 cents.