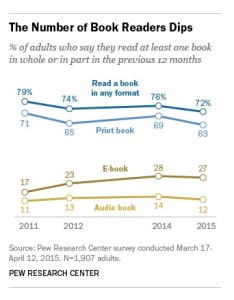 With the continued impact of eBooks, the growth of audiobooks, and the ever-present time-gobble of TV, movies, video games and the Internet, is it any surprise that fewer adults are buying and reading good-ole print?

A new study by the Pew Research Center states that “seven-in-ten American adults (72%) have read a book within the past year, whether in whole or in part and in any format, according to a survey conducted in March and April. That figure has fallen from 79% who said in 2011 they had read a book in the previous year, but is statistically in line with survey findings starting in 2012.”

It’s a but stunning to realize that, according to this report, only 72% of American adults report reading a book in the past year — in any format. That figure is down from 79% in 2011, a disturbing trend to say the least when your business is selling books. It’s also shameful, in my opinion, that possibly 28% of Americans have not read a single book in the past 12 months. I don’t know if this includes comic books, which absolutely count.

The report states that audio book consumption has remained stable at 12% of Americans at all ages. This is a surprise to us here at Empty Set, as audiobook sales growth is a big-ass chunk of our business. We put out ALIVE, TITLE FIGHT and THE REPORTER audiobooks in the last twelve months and have seen strong sales.

Listen, as the seasons change, it’s the perfect time to get some great new gear using our Moosejaw Coupon code SIGLER, which saves 10% on already discounted merchandise. Sun, sport, ski, board — whatever you love, they’ve got you covered!